“Is Ateneo well on its way towards getting its second crown? Is Ateneo the new La Salle back in season 75 and 76 that commands intimidation against any opponent that it faces? Is the Lady Eagles really unstoppable this season?” Those are just some of the many questions by various people on Twitter as the Lady Eagles remain on top of the standings ending the first round of the UAAP Season 77 Women’s Volleyball Tournament with a 7-0 card.

Coming into this season, the Ateneo Lady Eagles already have one major advantage: championship experience. May or may not be as solid as UST’s 27 and FEU’s 19, it is no doubt that the Katipunan-based squad is the much favored team to win the crown this year. Spearheaded by my idol Alyssa Valdez, who just became more beast-like in her stellar performance in the previous games *whoever said she already peaked at S76 should seriously hide now*, Ateneo seems to be the team-to-beat this season and hopefully end this season with yet another title!

Credits to Jhona Mae Dela Cruz via the GetBlued Facebook Page. 18,489 official crowd count for a first round elimination ender!

Ateneo’s game against UP is one for the books. The UP Lady Maroons gave the Lady Eagles their first two set losses for the season. Not to discredit the Tiamzon-led spikers, but the Lady Eagles’ off-game performance was also a major factor in that game. But I’m loving what I’ve been seeing on both defense and offense of UP. Should their performance continue to deliver like that, there will definitely be a major shake up in the team standings.

The game against UP saw consistency issues against the Lady Eagles especially Valdez who committed so many errors in that game. But she basically did a Kobe Bryant given that as human as she is, she delivered the much-needed and highly-important points at the fifth set of the match like a true clutch and veteran player. Of course, she wouldn’t be Season 76’s Best Scorer, Best Server, League MVP and Finals MVP for nothing bitches! She pretty much showed us why she is currently the most important volleybelle and Queen of Philippine Volleyball today!

I will not be emphasizing much on Alyssa in this post as Alyssa, as always, deserves a stand-alone blog post on her own. For my new readers, you might want to check my previous blog posts about my favorite Batangas native in the links below:

Alyssa Valdez and her rise to stardom

On Alyssa Valdez, the Lady Eagles and Heart strong

Heart strong: A UAAP S76 Women’s Volleyball Tournament Wrap-up (most read post in this blog ever!)

The above video is the much talked about footage showing DLSU’s rookie Soyud doing the swag up against Valdez. I was surprised and at the same time, pissed.. but let’s give it to her. How would you actually react when you blocked the country’s number one volleybelle with a superstar status and tagged as the Queen of Philippine volleyball arena? Enough said!

I think everyone would agree with me when I say the Ateneo-La Salle game earlier was pretty much a Finals preview at the end this season. By far, these two teams have showed incredible performance in the court and showed why they are two of the country’s highly followed collegiate teams in the UAAP. Hey, it’s just the end of the first round but it was held at the Mall of Asia arena with a crowd of more than 18,000++ as per MOA Arena Twitter page. And just to add more excitement this season, mark your calendars people and save the date: February 22 will be the second round rematch between the Ateneo Lady Eagles and the DLSU Lady Spikers at the Araneta Coliseum!

The online ticketing of SMTickets opened early on Wednesday but as of 12noon that day, tickets were already selling like hot pancakes that we can’t even access the website. I went to SM Makati ticketing center only to find out that only General Admission tickets priced at PHP75 were available much to our dismay.

Rookie of the Year 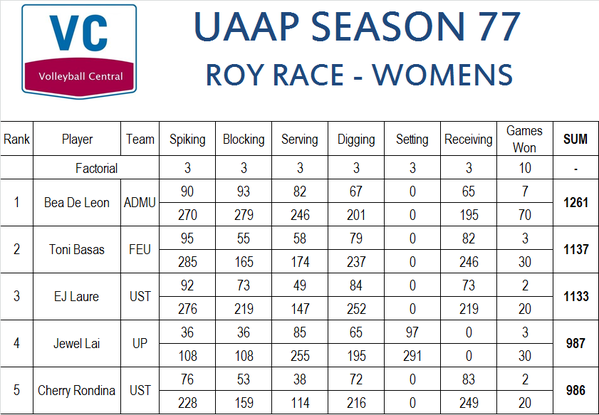 Credits to @VolleyCentralPH on Twitter for the image and to TMX Sports for the data! More power to you guys also

During the off-season, we’ve witnessed the much-hyped rookie Ennajie “EJ” Laure from the University of Sto. Tomas battle it out in Shakey’s VLeague where she totally impressed a lot of people (yes, including me). How can you not admire her, at such a  young year, she brings her team well as if she’s already a veteran even outperforming favorite UST players like Pam Lastimosa and Carmela Tunay. Her stellar performance in her maiden appearance in the Espana-based squad made her an early favorite for the Rookie of the Year plum this season.. but not until her rookie counterpart in Ateneo showed up and performed well on court. I’m talking about the rookie Lady Eagle Bea De Leon. Bea has been delivering very well in her games, that she was able to get a first-six slot this season.. in her rookie year at that. I don’t wanna explain much further as I don’t want to leave an impression that I’m hyping Bea De Leon but for sure, Bea will give EJ Laure a hard time in snatching that ROY plum this season! 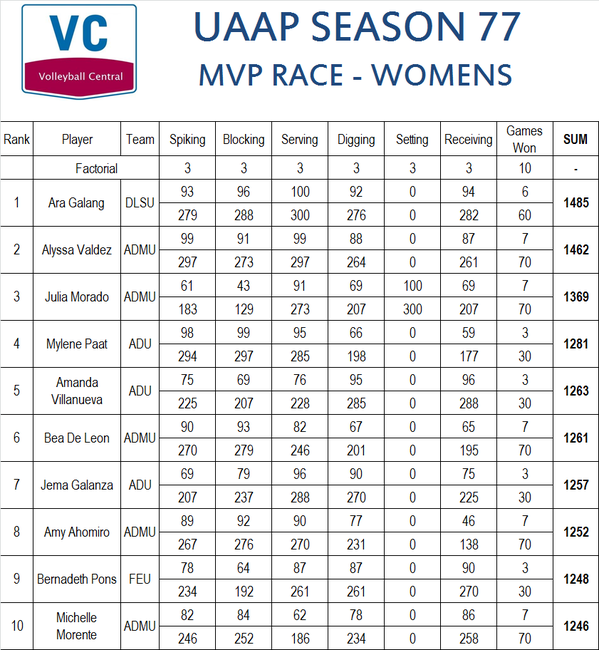 Credits to @VolleyCentralPH on Twitter for the image and to TMX Sports for the data. More power to you guys also!

The League MVP race remains as the most exciting plum this season with DLSU’s Ara Galang in close fight against Queen Lady Eagle Alyssa Valdez. A lot has been said here and there and statistics don’t lie, and the two have been neck-in-neck in the statistical game for the categories needed to satisfy the MVP qualifications.

Just so everyone would know, I’m an Ateneo fan but I also love La Salle’s Ara Galang and I just can’t wait for the Asian Women’s Under 23 Tournament on May this year as the two will spearhead the Philippine national team that will battle it out with our neighboring Asian countries!