In my previous January 11 post “Review: Ateneo Lady Eagles on UAAP First Round”, I started by writing the following:

“Is Ateneo well on its way towards getting its second crown? Is Ateneo, the new La Salle back in season 75 and 76 that commands intimidation against any opponent that it faces? Is the Lady Eagles really unstoppable this season?”

Little did I know that I’ll be writing this post a month after with Ateneo finishing the second round with an untarnished record, completing a historic 14-0 card elimination sweep this season! Time and again, the Queen Eagle Alyssa Valdez has proved why she’s the number one volleybelle in the country today with numerous awards up her sleeves (Season 75’s Best Scorer, 76’s Best Scorer, Best Server, League and Finals MVP) and more awards are looming for this Lady Eagle as UAAP Season 77 Women’s Volleyball Tournament second round come to a close in the coming days and Alyssa with her hands full of awards again. *crosses fingerS*

The Ateneo-La Salle game yesterday, in the usual hands-clasping, breath-stopper, is again one for the books. It’s actually a Finals-worthy game and pretty much shows us a preview of what we could expect come the Finals. As Boom said in the fifth set of the first Ateneo-La Salle meeting this season, this is the time where you’ll see the “Galangs and Valdezes of the world takeover”. And as I always say on my Facebook posts: at this point in time, you can not take away anything from Ara Galang and Alyssa Valdez as the two have clearly solidified their statures as premiere volleybeles the Philippine volleyball arena has ever witnessed. I think the more appropriate question that needs to be answered is who gets the better support system, which deserves another full-length blog post altogether. 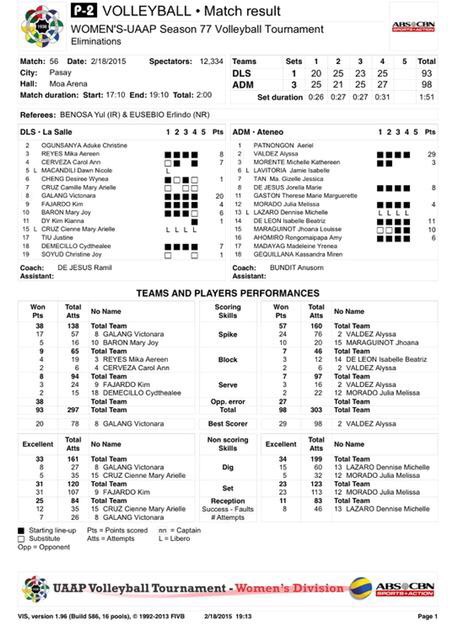 Gone are the days when haters usually tout ADMU as Alyssa de Manila University, due to Alyssa being the carrier of much of the load during games. Thanks to her strong support system in the sophomores Michelle Morente, Kim Gequillana and steady setter Jia Morado who is a strong contender and currently leading in the Best Setter race this season. Also adding to Ateneo’s deep bench is super rookie Bea de Leon, who is also a strong contender for the Rookie of the Year award and first year player Jhoanna Maraguinot, who proved that she deserves the first-six starter slot with her clutch performance at the tail-end of the game where it mattered the most.

Here’s the final seconds of Jhoanna Maraguinot’s clutch play even at the most crucial part of the game:

The one bigger fight in three weeks

Before #Heartstrong, ONE BIG FIGHT has been the Ateneo community’s battlecry in all thing sports. But technically, this has to be revised this season as the Lady Eagles are in for a tough challenge: three-week break. Having swept the eliminations and earning the golden thrice-to-beat advantage in the finals would also mean the long three-week break, which could either make or break the Katipunan squad. As we very well know in the previous season, the DLSU Lady Spikers were on a long break after also having swept the elimination rounds in season 76, when the Taft-based squad showed some signs of “rustiness” in their performance in their return on the court. This was somehow predicted by sports analysts as long breaks could lead to rusty performance on actual matches. While the Aby Marano-led volleybelles snatched the second Finals match in easy fashion, we all know what happened in the third and fourth Finals games, the Lady Eagles being crowned as the Champions in a Cinderella run-like fashion. See more of this on my blog post last year Heartstrong: A UAAP Season 76 Wrap-Up.

Of course, this thrice-to-beat advantage is not a surefire ticket towards getting the crown and giving the Lady Eagles a back-to-back stint. I think more than anyone, Alyssa and her teammates know this does not guarantee anything. They were on a roll in a Cinderella run fashion last year and crawled their way to the top when they beat the Bang Pineda-led Adamson University once, the Dindin and Jaja Santiago-led National University twice and the Aby Marano-led DLSU not once, twice.. but thrice.

Now that Ateneo will be on a three-week break following their elimination sweep, will odds be in their favor when they return on the court around March? Of course each and every Lady Eagle supporter hopes so! Whatever happens, I trust that Coach Tai, being with the girls for more than a year already, still has a lot of things up his sleeves as he continues to amaze every volleyball fan for his unparalleled coaching performance stint with the Lady Eagles!