In the interest of full disclosure, please know that I was born and raised in Davao City and have lived there for more than twenty years of my life. Since I was eligible to vote in the elections, I voted Rodrigo Duterte once as vice mayor in the 2010 elections and as mayor in the 2013 elections. If ever he will run again in the local post come the 2016 election season, without a doubt, I would still be voting Duterte. For everyone’s information, Duterte has served as mayor of my city from 1988-1998 and became the vice mayor in the May 2010 elections and gave way to his daughter Inday Sarah Duterte for the top local political post. Yes, in case this needs special mention, I voted Inday Sarah also and I love what she has done in the city. Rody Duterte regained his mayoral post in the 2013 interim elections.

Needless to say and without batting an eyelash, I am a satisfied voter and a staunch supporter of Duterte. 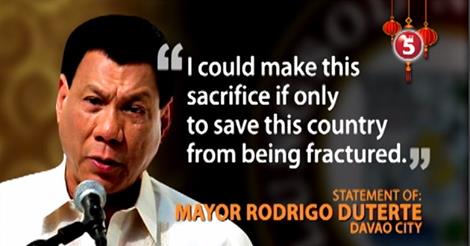 Digong, as he is more fondly called in Davao, is known to be feisty, straightforward and no non-sense talker-type of politician who already witnessed many political fiascos in his decades of service in the political arena. These past few weeks, Mayor Duterte’s name has spread like wildfire on national television, broadsheet papers, local tabloids and all over social media. With his ongoing heated exchange of tirades with DOJ Secretary Leila de Lima and CHR Etta Rosales, he became controversial and is the favorite topic of many, from tricycle, jeepney drivers and parloristas to Starbucks baristas and yuppies working in Ayala – Makati Central Business District.

Known as the ‘proud Dabawenyo’ in our office, I often receive random Lync chats from random people asking me random stuff about Digong. While there are those who became instant fans after his expose on the rice-smuggling controversy where he was summoned by the Senators, there are those who are utterly disturbed by his recent strong remarks. Being the pro-Duterte that I am, I felt obliged to defend my mayor against all the unfounded criticisms and baseless accusations being bombarded at him especially on how he manages Davao City with strict ordinances being implemented all throughout his jurisdiction.

These are just some of the many possible local ordinances that he MIGHT (emphasis on MIGHT) implement nationwide should he win the presidency next year. Please note that this is completely hypothetical and does not necessarily mean that Duterte intends to implement them in the entire country.

1. No smoking – I first went to Makati for work in July 2013. The first thing I noticed, people smoking practically everywhere. In my first few days here, I suffered from terrible headache due to never ending encounters with people who smoke. Under Duterte, the local government enacted the Anti-Smoking Ordinance in 2002 which prohibits smoking in public places. This became stricter in 2012 when then-Mayor Inday Sarah Duterte approved of The New Comprehensive Anti-Smoking Ordinance which prohibits smoking of any tobacco products, including shishas and ecigarettes in all accommodation and entertainment establishments, public places and modes of mass transportation within the territorial jurisdiction of the city. In 2013, Davao City was lauded by Bangkok-based group Southeast Asia Tobacco Control Alliance as the first South East Asian metropolitan to become smoke-free.

2. Liquor ban at 1am – Manila is where the (insert: crazy) party people at, enough said. People here go out of their houses probably around eleven in the evening and arrive at Valkyrie, Hyve and other high-end clubs for a party-til-dawn weekend. On the other hand, Davao has a law which prohibits serving, selling and drinking of any alcoholic drinks  in bars and even along streets and other public areas. The liquor ban is at 1am and last order at 12mn, and this is strictly implemented. In 2014, stating he wants “Davao to be silent”, Mayor Duterte rejected a petition spearheaded by certain establishments affected to ease its liquor ban from 12am to 3am during weekends.

3. 30kph speed limit – In the interest of public safety and order, Duterte signed the Executive Order no. 39 setting speed limits on all kinds of vehicles within the territorial jurisdiction of the city: 30kph within the bustling city center and 60kph along the city borders. Having lived and worked my ass off in Makati for almost two years now, I’m used to the notoriety of abusive vehicle owners and of course, the well-known terrible traffic situation in EDSA . When I went back to Davao last December 2014, I was not surprised that my fellow Dabawenyos really observed the said ordinance. Whether they followed the rule wholeheartedly or otherwise, is unnecessary as vehicle-related accidents due to overspeeding have become a rarity these past few months. Who am I to complain?

4. Firecracker ban – In 2001, the city implemented the city ordinance which prohibits the manufacturing, selling and use of any firecrackers or pyrotechnics for that matter, even during Christmas eve and New Year’s Day. Manila, on the hand, have a wide array of firecrackers and pyrotechnics on many occassions. While the firecrackers play a big role during these occasions, they also play a big role as to why many people (both children and adult) go straight to hospitals even before the clock hits twelve. In Davao, we celebrate these festivities with the following options: 1. by joining the annual Davao Torotot Festival 2. by dancing at street parties 3. doing home parties and the like. Others may find it boring how Dabawenyos celebrate these festivities, but with very minimal to even zero casualties, I think I’d prefer it this way.

5. Anti Discrimination Ordinance –I’m pretty sure you heard about the ‘hipon’ issue concerning the comedian Ramon Bautista. Non-Dabawenyos especially those supporters of Bautista were quick to judge Dabawenyos and the local officials for giving the comedian a persona non grata sanction. I believe the whole ‘hipon’ controversy was being blown out of proportion already and is being taken out of context especially by many Manila people calling Dabawenyos ‘defensive’ and ‘butthurt’. So the public may know, Davao City has a standing Anti-Discrimination Ordinance which strictly prohibits all forms of discrimination based on gender, sexual orientation and religious affiliations among others. We may agree or not, but the fact remains: there is an ordinance and the councilors did what was rightfully expected of them.

6. DDS – This acronym has rung a thousand bells all over national television and social media. Is it the ALLEGED Davao Death Squad (as claimed by critics but this was never confirmed) or Davao Development System (as emphasized by the Mayor himself)? A lot has been said, a lot has been done and this is something I wouldn’t really delve much into since this is a very complex issue which deserves a separate post. Due to the sensitive nature of the matter, I’ll let the much bigger press and seasoned journalists school you about this one. Haha

Will I be voting Duterte?

While there already are leaked television, radio, broadsheet and tabloid advertisements allegedly paid for by the ‘friends and supporters’ of Duterte, the said mayor has not until today, officially and publicly declared his intention to run for the presidency come the 2016 elections.

I have always said I am a firm supporter of Duterte. At least for now, I’m still undecided if I’m gonna vote for Duterte as president in 2016 should he decide to run. But if I could only have it my way, I would prefer him staying in Davao. Reason? The man is already seventy years old. I just don’t think the Philippines is ready for the Duterte-kind of leadership. I liked what he did in Davao and would love to see the city progress even more under his watch. Am I being selfish? Not necessarily. We have Miriam Defensor-Santiago, Grace Poe, Mar Roxas and uhm.. Jojo Binay who are equally brilliant and would make good as President of the Republic. (Yes, I’m playing safe like that. Haha) Why I don’t think Philippines is ready yet you might ask. Well let’s put it this way.. if you have religiously read this blog post, you would have realized by now that Davao is a well-disciplined city and we follow (although, we may go against the Mayor at least in a few occasions but eventually follow the laws put in place) what is ought to be followed.

I said it before, I’m going to say it again: Non-residents of Davao and those who never visited, especially those keyboard warriors (those who hide under the cloak of somebody else’s face and make rude remarks all over social media)  will never understand the culture that we have, much more so Dutertes. Where Davao is currently at right now, being the third most economically progressive city in the country and as per crowd-sourced rating site Numbeo.com, the 9th Safest City in the World even besting Stuttgard in Germany, Abu Dhabi and Hong Kong, is largely because of Digong and his administration’s effective local governance and is also largely attributable to the respect and unwavering support of Dabawenyos.

To people who don’t mind about politics.. fence-sitting is never a fancy habit dear bitches. If in any case, you still have questions on my mayor that were not addressed in this more than 1,500 word-blog post, feel free to ask me on Facebook: Jan Patrik Laroya, Twitter (@bunsoi). Or if you stumble upon me in the office or walking in Ayala Triangle, ask away! I’ll be more than happy to entertain your questions and your thoughts.