For the uninitiated, Uber is a San Francisco, California-based transportation network mobile app which seamlessly connects riders to drivers through the app on people’s smartphones. GrabTaxi, on the other hand, is a Malaysian-based mobile app and is by far, the fiercest competitor of Uber in the South East Asia region. I am writing this post under the assumption that you guys know how this app works.  Under the conventional taxi ride, one hails a cab outside the street and see if it’s available for a cab service. If it’s a rush hour, luck can only have you on board.

In a fast-paced world that we have right now, people would most often than not, go for the most convenient mode of transportation. This is where Uber comes into play. With your smartphone and mobile data or WiFi connection, you can electronically hail (e-hail) your private driver via Uber at your fingertips at the comfort of your room/office or wherever you are, as long as you show up at your  designated pick up point once your Uber driver arrives. That is what Uber is about.. convenience. It’s as simple as ordering your favorite pizza via food delivery mobile apps or purchasing your fave sporting apparels via Zalora. And oh, it’s worth mentioning that you can get the free Zalora App on Google Playstore.

What I like about Uber is having to book a cab without bringing cash. This is most important especially for people like me who don’t usually bring cash and prefer to pay everything using a credit card. I like getting off in my Toyota or Honda sedan car without having to shove my hands in my wallet for fare payment and having to wait for the driver to hand me out my change. For rewards points purposes, for convenience and what have you.. but using credit card as mode of payment pretty much spells out  the word convenience. According to the grapevine, GrabTaxi is already in the process of introducing  Uber-like cashless payments to make it at par with the competition. 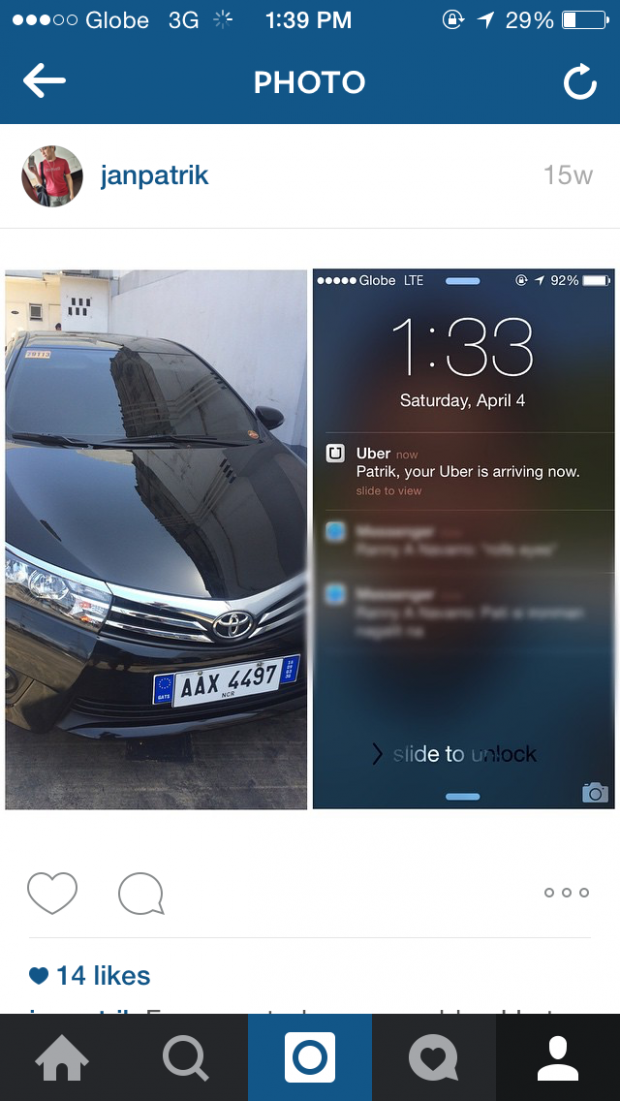 To be honest, I only rode a cab via GrabTaxi thrice. First experience was from my Ayala office to my place along Chino Roces Avenue. Normal taxi ride would cost me around PHP75, my GrabTaxi charged me PHP78. I handed out my PHP100 payment and expected a change. But just like many taxi drivers in Metro Manila, the driver didn’t give me a change cos apparently, he doesn’t have a change. And that happened, on a 10pm which would make it even more difficult to believe he doesn’t have a change.

My second GrabTaxi experience was in Davao. I rode it from our residence in Gem Village, Ma-a to Davao International Airport and I was charged around PHP150. I gave the driver PHP200, and it’s still crystal clear to me having received a fifty-peso bill as my change from my driver. I was not surprised. Davao is known for its honest taxi drivers, which are in stark contrast against many Manila taxi drivers. (Note that I said many, not all. So I’m not generalizing as my friends can attest that there are still a few Manila drivers who are pretty much honest in handing out change in fare.)

The third GrabTaxi experience was back in Manila. Despite my bad first experience and believing everybody (or say, the app) deserves a second chance, I gave it a try in the hopes of getting a better cab service this time. While I received my exact change, the driver was rather arrogant when we didn’t agree on the route we will be taking. I know my route very well and he suggested another (and much longer) route which I am also very much knowledgeable of which would lead us to a worse Makati traffic than anywhere else in the metropolis. Sadly, this gives me another reason to believe that some GrabTaxi drivers have this ‘ordinary metro taxi driver’ culture, if you know what I mean.

I’ve noticed constant bickering among the drivers of the country’s leading transport mobile apps, I believe the riders’ experience can clearly separate one ahead from the rest of the competition.

I’m not closing my doors yet, but one day, I’d still like to give GrabTaxi a try given the following circumstances:

1: They publish a discount coupon again to the public

2: Uber is not available (which rarely happens)

What’s your experience using Uber, GrabTaxi or EasyTaxi apps? Let me know in the comments section below!