Last Sunday night, I was talking to this friend of mine from Manila, James Euric, via chat on Facebook.  We were talking about random stuff, and eventually found ourselves talking about relationships, life of a not-straight and the like. But the conversation became more interesting when he asked:

Upon reading this, I was like.. UGH. I was clueless what to answer this 15 year old curious friend of mine. Most single people out there would probably give an answer to this question in an instant. At first thought, it might seem as if it’s a very simple question since I have been single since birth. But that is not actually the case. Yes.. nag HANG AKO. 🙂

In a melodramatic status I posted on my Facebook wall last Friday, I had an exchange of thoughts with a fellow not straight via the comment loop. See the picture below:

All this time I’ve been telling myself it really feels good to be single. No commitments and no pressure. But after learning how Rowendel sees it, my thoughts on singlehood changed.

While it is true to say that singles could express the feelings of “singlehood” better than the others, what I learned from Rowendel is more of a logical one. How would I know what it feels like to be single if I haven’t experienced yet being in a relationship with someone?

The idea is very valid. It goes with the saying that “How can you feel the very essence of happiness if you haven’t experienced sadness“. But don’t take this out of the context. I’m not associating happiness to being in a relationship nor am I associating sadness to singlehood, ok? What I am trying to say is that to qualify the sweetness of being single, one ought to have experienced being in a relationship first so that one would be more credible to differentiate the two given that you already experienced both.

Back to the question ‘what’s good about being single’, I answered it from the perspective of one who never had any relationship yet. 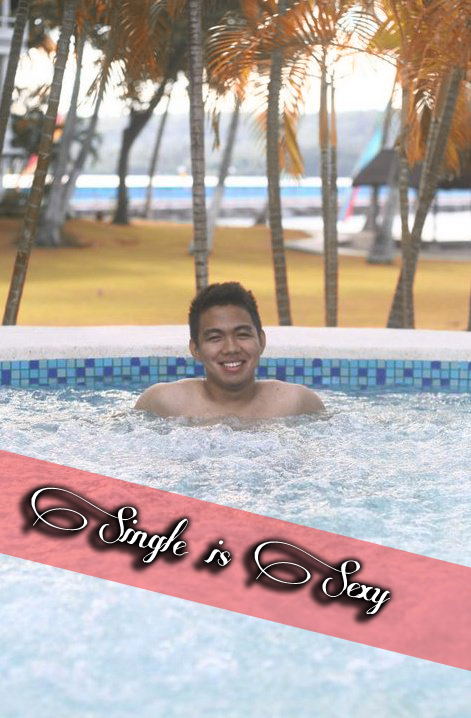 Thanks to Vim Malicay for editing the photo.

On the naughty side, we have all the freedom in the world to flirt with anyone we like without feeling guilty of doing the thing. In addition, some of my friends joke that being single means one is 50% richer than being in a relationship since when you’re taken, most often than not, you share your money with your partner. On the other hand, when you are single, your money is your own and you can buy anything you want.

On a more serious note though is that, we can spend quality time with our God, family, friends and of course, we have time to join activities that are of interest to us.

I would like to give a little unsolicited advice I learned from a text message I received from a friend months ago:

This post reflects my personal views on being single. But of course, this is not absolute.

Now, I’d like to end this post by throwing the question back at you my dear readers:

WHAT DO YOU THINK IS GOOD ABOUT BEING SINGLE? 🙂

Answer the question and let’s see who can come up with the most creative and realistic answer. C’mon, I know you have something to say! The most reasonable answer will win something from me. LOL 🙂