BEHOLD, THE GAY APOCALYPSE IS HERE.

BUBBLE GOD SEBASTIAN CASTRO IS OUT TO TURN THE WORLD GAY.

Calm yo tits, watching the video below wouldn’t make you gay. Unless, you really are and as Sebastian puts it.. “you just don’t know it yet.” Kidding. Haha 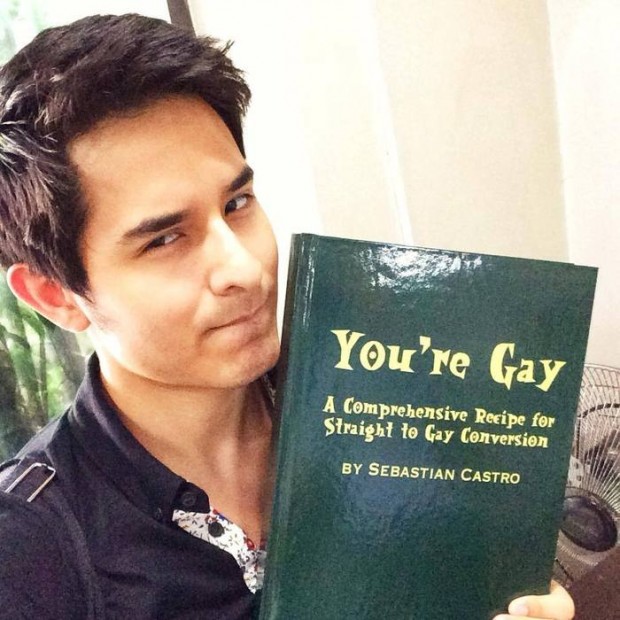 *Before I get bombarded with questions as to how and where to buy the book, lemme just clarify the book is for sale for one thousand USD and can be bought directly from me. Of course, I’m kidding. Haha I already asked Seb about it before and he clarified that no such book exists (at least on our knowledge) and that the book is a mere props for the music video. So wag na kayong umasang macoconvert nio mga crushes nio. Hahaha.

For the uninitiated, Sebastian Castro is a Peruvian-Japanese model and singer who became famous back in 2012 when he released his first ever music video Bubble which made it to the Trending Topics list on Twitter and even dominated Facebook for quite some time. Since this post is particularly about his new music video, you might want to back read my old post featuring Seb and his videos on his official YouTube Channel: Spotlight on Sebastian Castro.

On May 1st, he publicly announced on all his social media accounts the release of his latest music video “You’re Gay“. As expected, the video was an instant hit and made a buzz on social networking sites and even landed on Manila Trending Topics list on Twitter.

A little background to the music video is posted on Seb’s official YouTube Channel, here it goes:

once upon a time.. a little gay boy had a very big crush on a straight boy.. try as he might he couldnt get the straight boy to notice him.. so he cooked up a magical potion that turned everyone who drank it GAY.. well they wouldnt automatically turn gay thats just stupid and makes no sense.. first they seizure like a vagina in heat.. and THEN they turn gay

before little gay boy knew it.. the virus was spreading faster than the legs of those cheerleaders he couldnt compete with…. cute boys from all over the world were turning gay… and just when he thought this gay zombie apocalypse couldnt get any better… the straight boy that started this whole mess turned gay too
and they road off into the sunset .. and kissed a lot and made babies .. real ones.. and they lived happily ever after

Enough of the talk, presenting.. Sebastian Castro’s latest hit music video.. YOU’RE GAY. (I mean the song. No, I’m not referring to you dude. Haha)

His phenomenal music video Bubble reached more than 1.2 million views as of this writing and was widely talked about even on mainstream media as he guested on several shows on national television. However, due to its sexy nature, YouTube has taken down the video for a couple of days. But due to public demand, the video was restored to everyone’s delight. Watch the video below:

Earlier this year, he released his second music video “Theban” which currently has more than 500,000 views on YouTube. Watch the uncut and hot version of Theban below.

I couldn’t be any prouder  for this guy as he has shown that he is more than just a pretty face by showcasing his creative side thru his upbeat songs made to life with oh-so-sexy and funny music videos.

Here’s just a simple request Seb: I hope your next song’s gonna be a ballad one ala Alex Goot,Adele or if not.. Mariah Carey levelssss! Haha. I think it’ll be all the more interesting to hear you sing a romantic ballad: could be dedicated to your fans in general, to your boyfie Ryan, or you have all the option to even dedicate it to me. Of course, I wouldn’t be complaining. Kidding! Haha But I’ll be very happy should you decide to do it for the third option. *wink* haha

To people who, up until now, urging me to push the long-pending blog interview with Sebastian.. it’s still in the works. But will definitely work it out with Seb. Hope he gets to read this. Haha

So after reading everything and watching Seb’s latest hit, question: are you man enough to conclude you are gay and you didn’t know it until you watched the vid? Nah. Doesn’t matter. You know yourself better. Haha

To my fellow not-so-straight guys out there, c’mon now.. and let’s turn the world gay! 🙂