You will not be able to read the rest of the content unless you say: *I, (state your name), SOLEMNLY SWEAR THAT I’M UP TO NO GOOD.* There, proceed. 🙂 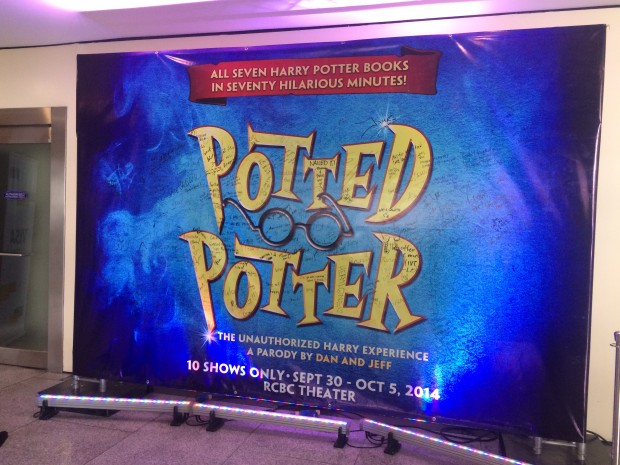 For the third straight year, Potted Potter showcased its killer combination of magic, amazing expensive props 😛 ,  humor.. and yes, lots and lots of humor! And I heard, Philippines is the only country (outside of the U.K.) where Potted Potter was staged for three consecutive years! I think that pretty much says how much of a Harry Potter aficionado Filipinos are.

I’ve always wanted to watch this show back in 2012 and 2013, but time, money and proximity always get in the way and restrain me from watching. Now that I am working here, and thank God RCBC Plaza is just three blocks away from the office, I was able to finally witness the magical prowess and wit of popular US comedic duo Ben Stratton and James Percy! 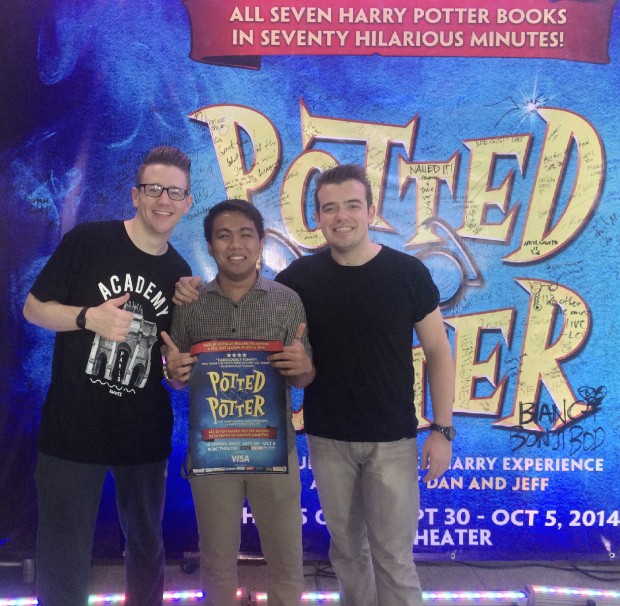 With the hilariously funny comedic duo of Benj Stratton and James Percy!

WHAT IS POTTED POTTER?

For the uninitiated, Potted Potter is a parody stage play that condenses all seven Harry Potter books into seventy hilarious minutes. Well strictly not seventy, as the show ended at around 3:30pm. But who’s complaining? We were in for a really really great treat from the duo! It all started in 2005 when Olivier Award-nominated actors Daniel Clarkson and Jefferson Turners were asked to create a five-minute show to recap the first five Harry Potter stories, in front of fans waiting for the midnight release of the sixth installment Harry Potter and the Half Blood Prince. The mini street show expanded into an hour-long performance and its fan base grew bigger and bigger as the years went by. 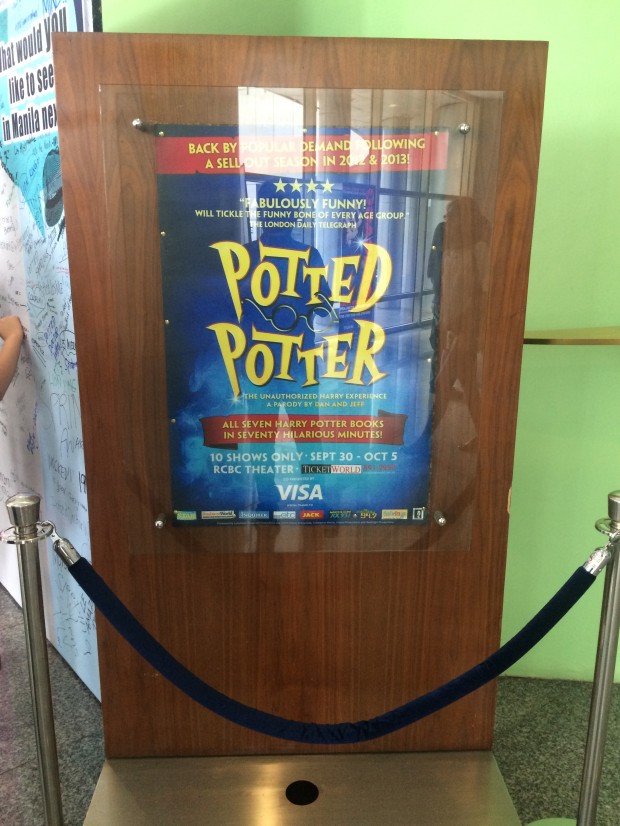 It just feels so good to be with people who share the same passion (yes, loving the HP story is a passion) and excitement (others were shrieking btw) for this stage play. Being surrounded by kids who were in their Harry Potter-inspired costumes, and those young at heart (like me) whose love for Harry Potter has never faded even for a single bit, I JUST FEEL SO NORMAL.. SO HUMAN.. SO ME. I FEEL EXTREMELY HAPPY WITH FELLOW POTTERHEADS. 🙂

Check out my pic below taken four years ago back when I was still in college. 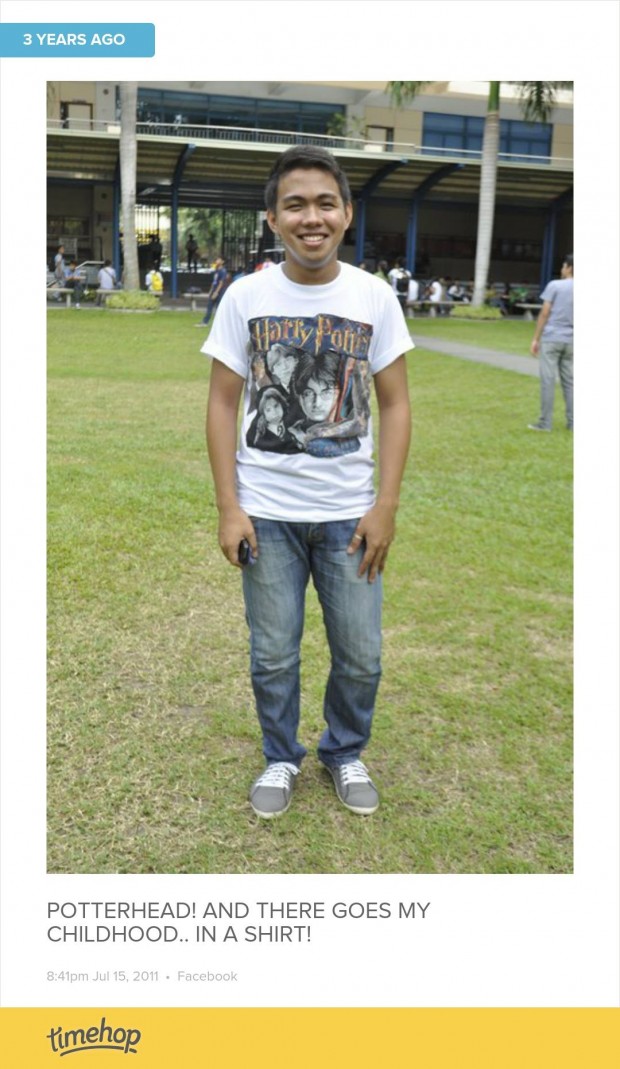 Yes, my childhood.. in a shirt. This was a collage of my four other Harry Potter shirts back from elementary til HS. Since they no longer fit me, I had it tailored into one shirt and wore this at the opening night of Harry Potter and the Deathly Hallows! All eyes were on me. Beat that! Lols 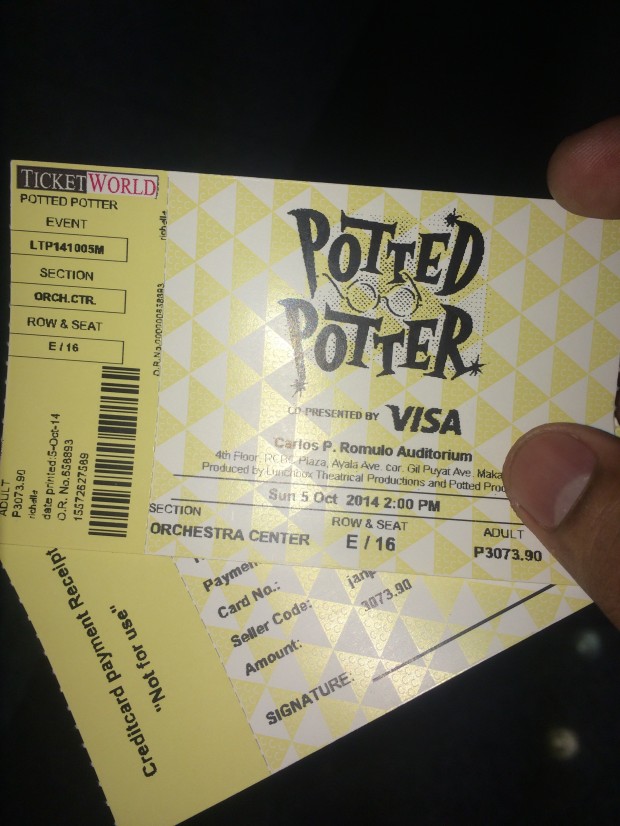 Was not able to watch its pilot run on September 30 (where Dan and Jeff were present) as I was in an out-of-town field work in Pampanga so I chose to watch the October 5, 2pm show earlier. YES.. I. You read that right. I watched the play alone. It was hard convincing people to watch when the only tickets remaining were thee VIP ones at the Orchestra Center priced at PHP3,100 (inclusive of VAT and Ticket Protect). But then again, being the hardcore fanatic that I am, it was still experience over money for me. So I watched it alone. 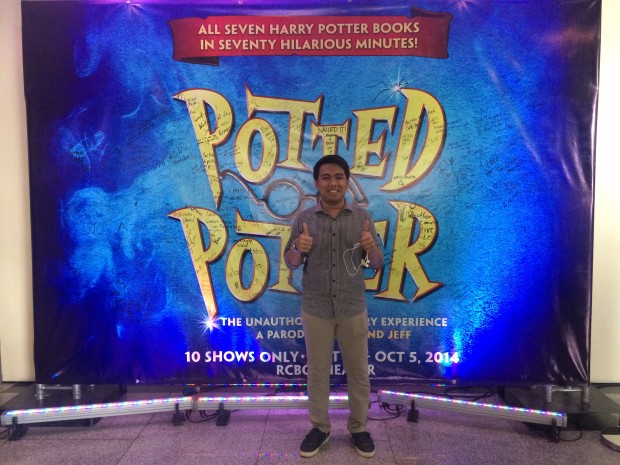 I will not go into detail into every scene so as to not to spoil people from other countries who are yet to watch the play at their shores. But let’s keep it simple: Ben and James were hilariously funny to the nth degree! The script, of course, was well written. But the timing and execution and charisma of both guys made it work so well that the audience roars in laughter in every scene! Totally nailed it. And hey, can I just say Ben looks a lot like Channing Tatum in person? Haha! Also, I admire his patience in handshaking almost everyone in the audience before the show even started. James was.. ugh, just oh so perfect for the Harry Potter role and the way he connects every scene to the next book of the series is really really funny!

TIPS ON WATCHING POTTED POTTER (OR OTHER PLAYS) ALONE! 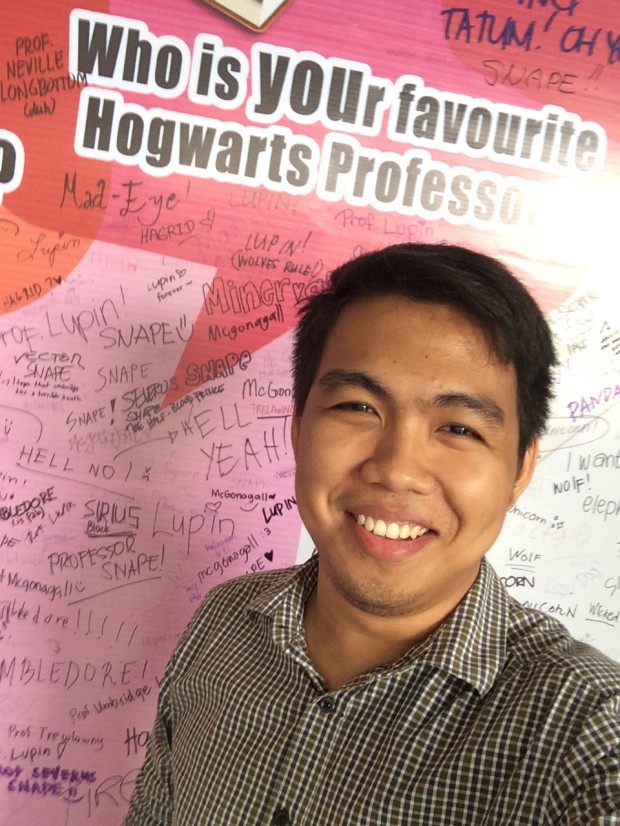 1. For anyone who might have seen me, or at least, were familiar to that guy who, at first, took pictures all by himself at the photowall, yes guys, that’s me. Haha Anyone who judges my selfie moments back there will be hit by an Unforgiveable Curse (the Cruciatus curse might be of little help) And then at last, I was asked to take a picture of a Chinese barkada so I grinned yes, thinking of having my pictures taken by them in return. And voila, here’s the picture. Hahaha 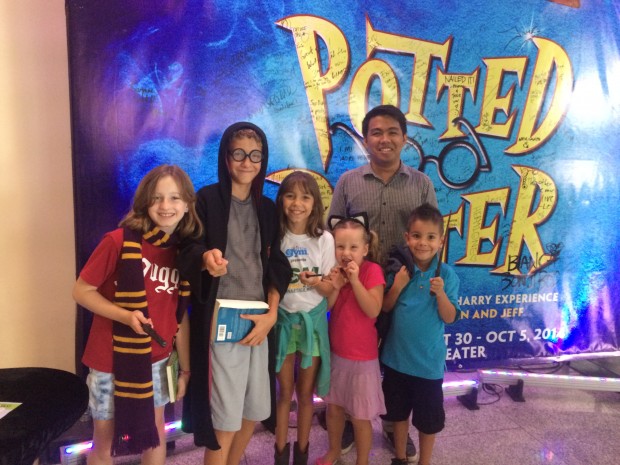 With them cute little wizards. Thanks to their parents for allowing me just so I wouldn’t look awkward. Or so I thought? Lols

2. People were all writing their messages on the backdrop while I was left Pilot marker-less at the back. How I wish I could do Accio to get somebody’s pen, but I didn’t as use of magic outside Hogwarts is prohibited for 17 years old and below wizards like me. (Yes, take that shit bitches.) I was handed by a GrabTaxi salesman a brochure for their service, filled it out.. and said: “Kuya, pa borrow naman ng pen pang sulat lang po dun.” Kuya,: “Sige sir ok po.” 🙂 So what did I write? Well here’s pretty much a shameless promotion hahaha!

I hope Ben and James wouldn’t mind for a little shameless promotion! Love you guys! 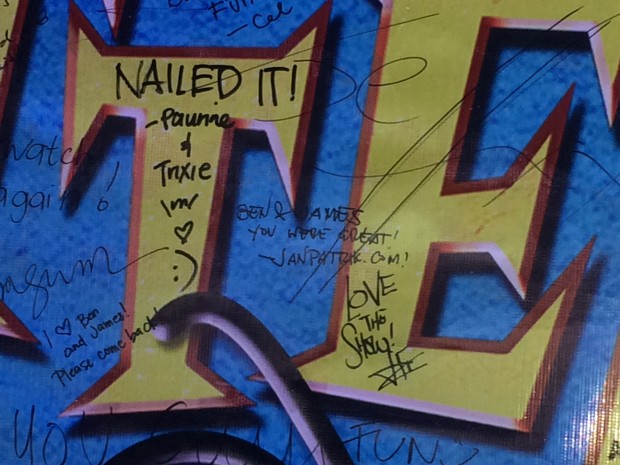 Oh yes, I can see it from afar! No need for Lumos spell!

3. The spoiled rich kids who were in tantrums asking for official Potted Potter tickets were easily handed with the posters by their ever supportive parents. On the other hand, the poor social climber that I am, I talked to the “spokening English” (LOL) guards and said: “Sana andito rin mommy ko so I’d be given a poster.” And the lady guard, who was apparently a mother herself, said this in conyo-kung-conyo lingo: “Ay you still don’t have one sir? Teka, will give you po.” Told myself:  I AM LEGENDARY!! 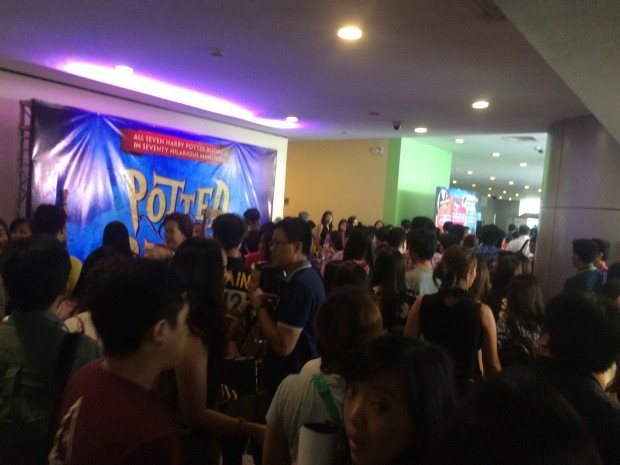 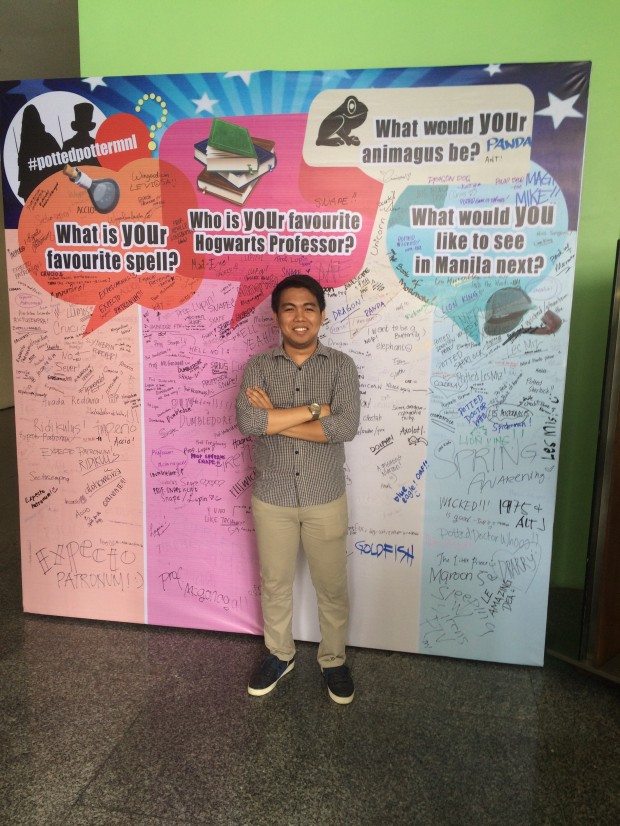 So yes. That pretty much summarizes my first Potted Potter experience! Realization: In contrary to what others have been saying, the Harry Potter fandom has never died down. In fact, it still lives. It will always live at the heart of every Potterhead as this is not your ordinary fandom, it’s a fandom that’s a whole lot different from the others because we grew up watching it, reading it.. and yes, loving it. 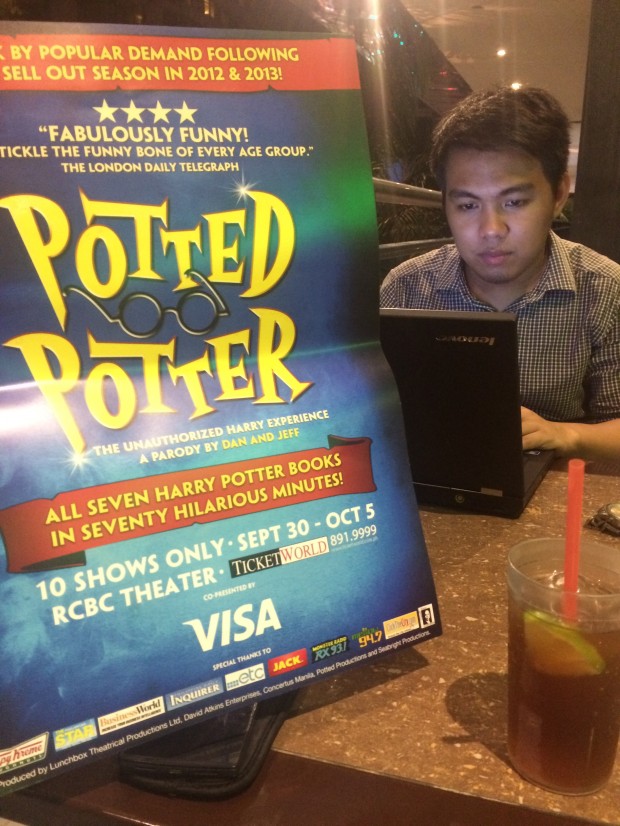 Me while writing this blog post at Gilligan’s Glorietta 5. Haha Thanks to my friend Juvy for taking this shot!