I’m writing this post since I just can’t move on from yesterday’s epic volleyball match between Ateneo Lady Eagles and National University Lady Bulldogs in UAAP Season 76’s do-or-die semifinals match. We all witnessed an exciting showdown between two of the most loved and most powerful players in Philippine women’s volleyball history: NU’s Dindin Santiago and of course.. Ateneo’s Alyssa Valdez. I already ran out of words to properly describe Alyssa Valdez’s game but my previous post Alyssa Valdez and her rise to stardom will summarize what I have to say about this phenomenal Batangas native. 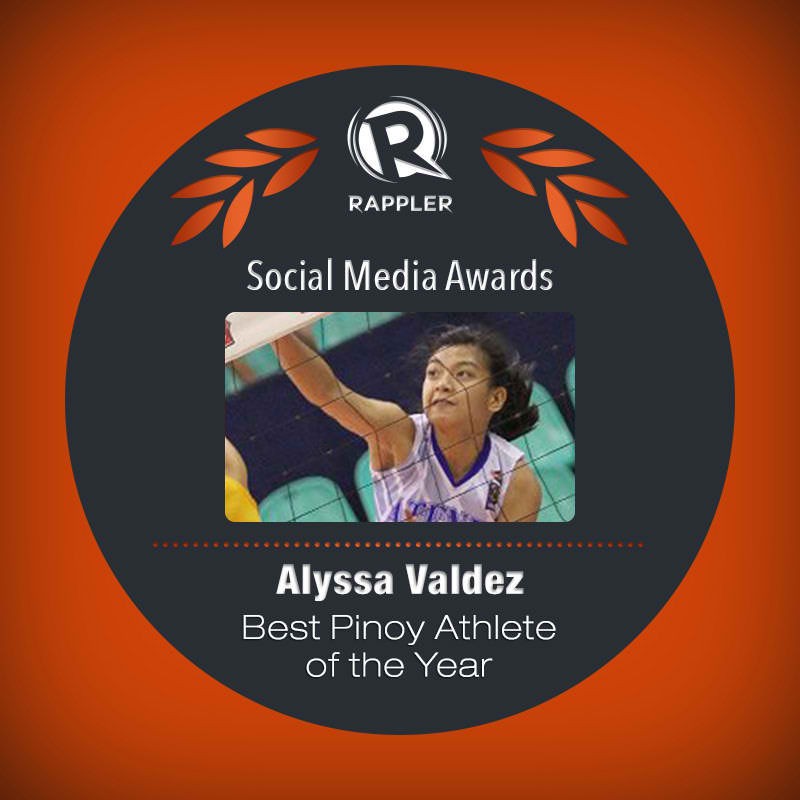 At the start of the season, sports enthusiasts predicted the Ateneo Lady Eagles to flunk in the standings with the graduation of five of their starting six players in the persons of the famous Fab Five — Fille Cainglet – Cayetano, Gretchen Ho – Domingo (in the making LOL), Jem Ferrer, A Nacachi and Dzi Gervacio.  In fact, I wrote Farewell Ateneo’s Fab Five to express my thoughts which to this date, is the most read article of this blog. Their exit was definitely a big loss to the Ateneo community. To make the long story short, we started the season with little to no expectations.. AT ALL. In season 76, we saw new faces and bodies suited up for the Ateneo jersey, namely: Jia Morado, Michelle Morente, Kim Gequillana and Ana Gopico. Given that they’re rookies, many expect that it’s still gonna be an Alyssa Valdez-heavily laden show for the Ateneo de Manila University and that they might end up in the lower end of the rankings. 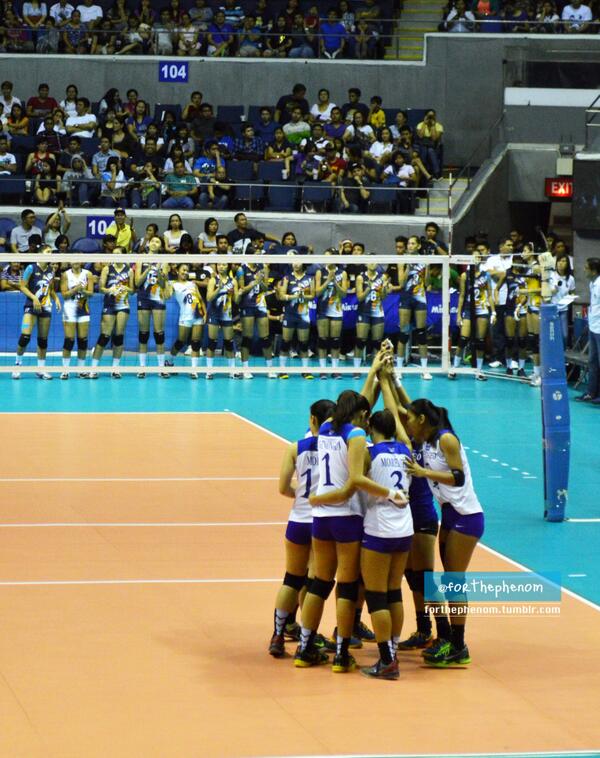 But wait, as we very well know now, this is definitely not the case as they clipped the Lady Bulldogs in a thrilling and nerve-wrecking four-setter match yesterday at the Araneta Coliseum.

Worthy to take note is the fact that Ateneo has not won even a single game against NU in the preliminary rounds this season which made people question the ability of Ateneo to make it in the Finals, especially given the twice-to-beat advantage that NU enjoys. But the Lady Eagles proved they can make it. In fact, they just defeated NU in two consecutive grueling games to finally earn the chance to fight for the very elusive championship crown.

Ella de Jesus, one of my long-time favorites, has definitely shined in that game. Standing at 5’1, how can this petite spiker able to slam the door between towering blockers of NU and at some point, even managed to block the 6’2 Dindin Santiago and young sister 6’5 Jaja Santiago? “Puso” definitely prevailed over height.

I hate to admit it since I’m a big Alaska fan back when I still watch PBA games during my elementary days, but no doubt, Ginebra is the most loved basketball team in Philippine arena. On the other hand, I don’t think anyone can contest with me when I say Ateneo is crowd favorite among all other teams in the UAAP women’s volleyball tournament. Due to the team’s huge following, it is no question that the Ateneo Lady Eagles as a whole, is indeed, the Barangay Ginebra of Philippine volleyball.

This year, the most coveted MVP plum is again in controversy. Will it finally be given to Alyssa or will it steer another hot issue?

In season 74, many were rooting for Alyssa as the league’s Rookie of the Year. However, since she sat out for a year due to residency issues following UAAP protocol, she was ineligible for the said award, giving way to Ara Galang of DLSU.

In Season 75, many were disappointed when she didn’t get the most coveted award due to her so-called inability to lead her team. But in the ongoing season 76 of UAAP, with a bunch of rookies up her sleeves, we now see Alyssa leading the charge for her squad. We now see her talk with her teammates inside the court and acknowledges responsibility for her team. 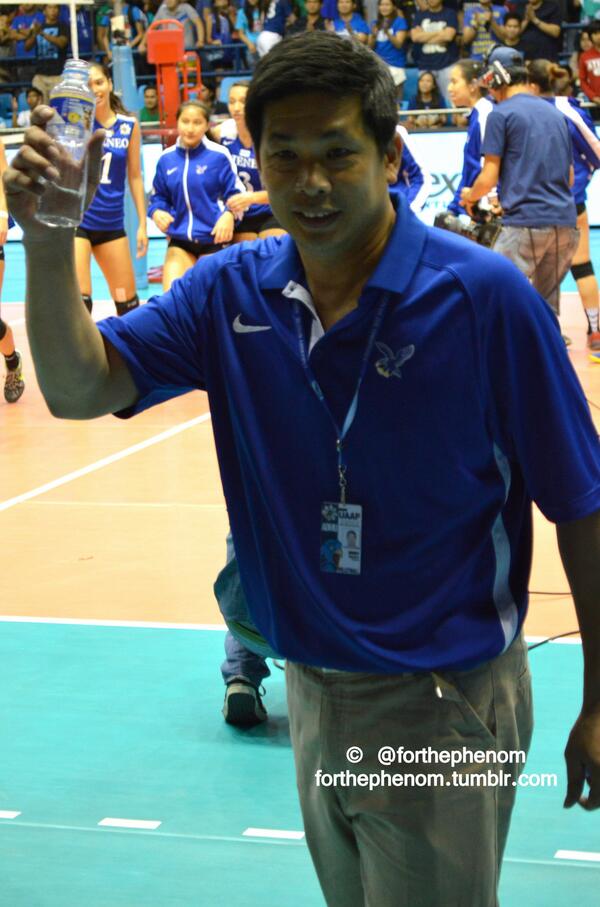 With the exit of the well-loved head coach of the Lady Eagles for five years, Roger Gorayeb, came the entry of the new Thai coach Anusorn ‘Tai’ Bundit. Culture differences and clear communication between coach Tai and the ladies were the problems seen by many critics. Even in huddles, we often see coach Tai having difficulties talking to his players. But we often hear him say his now-famous words “HEART STRONG! HEART STRONG! BE HAPPY!”. But what I certainly liked about coach Tai is that (not to discredit coach Roger, I love him too!) he celebrates with his players even for single points achieved. We always see him doing his signature “jogging forward and backwards” in the sidelines and jumping when his player gets a point, something that coach Roger doesn’t usually do. 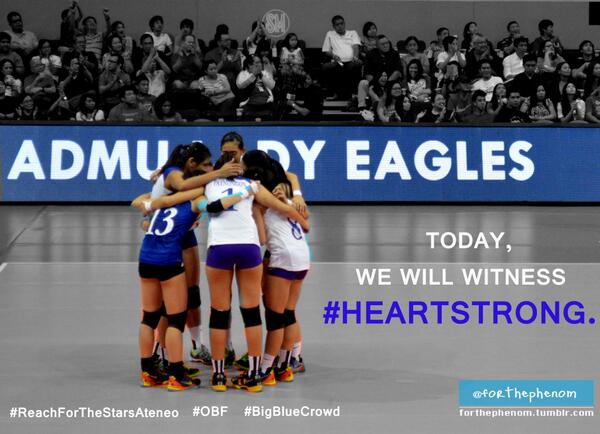 Is it the new ONE BIG FIGHT? Doesn’t matter. For as long as I’ll be cheering for Alyssa and the rest of the Ateneo squad, I’ll be shouting both ONE BIG FIGHT AND HEART STRONG, BE HAPPY at the sidelines! 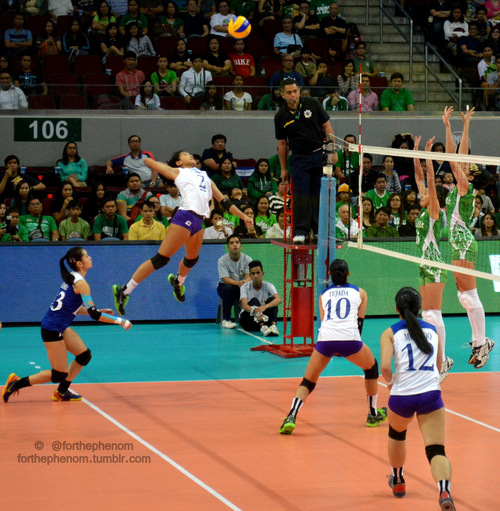 This Wednesday, we will be seeing action between DLSU Lady Spikers against the Ateneo Lady Eagles at the Araneta Coliseum for the Finals Game 1. Finals Game 2 will be on Saturday after the Individual Awarding Ceremony. Whether or not Ateneo will make it and finally achieve the very elusive championship title is something I don’t really mind for now. I once said I don’t have expectations for this team this year, but I never said it’s not possible for them to reach this far.

And as I always say, Ateneo is a rebuilding team filled with young but enthusiastic and talented players. Making it in the semifinals and now to the Finals is a feat already and it’s something to be really really proud of! I am more than ready to face whatever happens to my ladies this week. They have reached this far, they have nothing to lose. At this point with such an amazing achievement, they are already champions.

See you in Araneta Coliseum this week Ateneo community!

Let’s be one in shouting GO ATENEO! ONE BIG FIGHT! HEART STRONG! BE HAPPY! 🙂