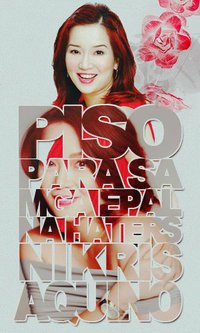 We’re not personally ‘in-the-know’ in the lives of Kris Aquino and James Yap. We were not there when it happened. Only Kris, James, Bimby and God know what really transpired in their residence on December 3, 2012. My point is: WE WERE NOT THERE. Who are we to judge and lambast either parties when we do not have first-hand info of the incident? WE ARE NOT in the proper position to accuse either Kris or James as a liar, depending on which side you’re taking.

I’m a die-hard Kris Aquino fan since I was a kid, but in the spirit of fairness, I WILL NEVER JUDGE JAMES BASED ON EITHER ACCOUNTS. Fellow Kris Aquino fans have been saying that James is a liar, that James is a gold-digger bringing up this issue just so he could get more money from Kris. The money issue, is of course, quite relevant but let’s not delve deeper into that issue. Given the relevance of some accusations against James, I still won’t judge James whether he’s being dishonest in this recent issue or not. Why? Because I WAS NOT THERE WHEN IT HAPPENED.

It’s quite frustrating when people side with James and accuse Kris of being a liar on the mere ground that they believe James is a more credible person than Kris, that seeing James cry on national television is more authentic and sincere than seeing Kris doing the same.. having seen her done that quite a number of times already, that James is less-dramatic than Kris and all that shit. I mean c’mon, we can believe in our theories all we want, but please.. let’s refrain from saying unnecessary judgments in absolute terms AS IF WE KNOW WHAT REALLY HAPPENED. 🙂

Again in the spirit of fairness, please refrain from posting unfounded criticisms and bombarding either parties with baseless accusations. Because in fact, as mere spectators of this whole new issue.. WE CAN ONLY GUESS. And perhaps, your guess is only as good as mine. Our guesses are banking on our subjective and biased views on either parties. I’m not saying you should keep yourself from speaking your mind, what I’m trying to say is let’s be more responsible in what we say.

Love her, or hate her.. she’s KRIS AQUINO.

Much has been said. Many have judged. But you know what I like about this woman that to this very day, I’m still very much fascinated with her? She has so much resiliency up her sleeves. She’d been through a lot already. We’ve seen her fall, we’ve seen her cry.. but look at her now: she’s still at the top of her game nailing every showbiz opportunity offered to her. Box-office movies, top-rating shows, high-caliber celebrity endorser are a few of what Kris Aquino can produce banking on her skills as a celeb which earned her the moniker Queen of All Media. Oh wait, this isn’t a tribute blog post for her so I better stop here. :p Oh and please… MASASAPAK KO ANG MAGSASABING TINAWAG SIYANG QUEEN OF ALL MEDIA DAHIL SA MGA MAGULANG NIYA AT KAY PNOY! :p

Call for RESPECT AND PRUDENCE.

So there. I hope I was able to convey my message pretty well: let’s respect James and Kris. A gag order has been issued already so let the Court decide. And with this gag order, I hope netizens stop bashing either parties. And while we’re at it, I sincerely hope and pray only the best for James, Kris, Josh, Bimby and everyone else. I hope both of their fans and haters would do the same, too. At the end of the day, I hope we realize it’s not really about Kris or James, but about Bimby and the child’s happiness. 😀

As what I always say..

PEACE, LOVE AND HAPPINESS EVERYONE!