Disclaimer: This is not a paid post, nor is this a political campaign material. The views and opinion expressed in this post are solely mine and do not, in any way, represent the views and opinion of any company I’m connected with. In the interest of full disclosure, be it known that I was born  and have lived in Davao City for more than twenty-three years and is currently living and working here in Makati for almost three years now.  First post of this #Duterte2016 series, “Why Manila should be very afraid of Duterte” gives non-Dabawenyos a fundamental understanding of who Mayor Rodrigo Duterte is and how he has performed as top executive of Davao City for two decades.

It’s been a day after the second leg of COMELEC’s PILIpinas Presidential Debate and the whole country is still very much into it. A lot has been said and I believe this will go down the memory lane as the most followed and most intense presidential election ever. Election-related opinion and memes have dominated social media platforms Facebook and Twitter all day. Thanks to the ever-growing power of social media which allows everyone to be part of each and every issue which practically makes everyone instant political analysts. But this post is not necessarily about what transpired in the debate yesterday as I’m pretty much certain that you were able to watch it. Allow me to share with you my few cents regarding this whole political fiasco.

I’ve been following all the political drama leading to the May elections and I just noticed one thing in common among Binay, Poe and Roxas. Despite the barrage of corruption issues, Binay remains unfazed in his political campaign from day 1 of his being a vice president until today. Bombarded with incompetence and trust issues, Roxas remains steadfast and self-asserting. Threatened with disqualifications due to legality of her citizenship, Poe battles it out with all her legal might. If there’s one thing that makes these three look the same, it’s this: they all ‘lust’ for the presidency. Binay and Roxas have long been salivating for the country’s top political post while Poe has always said she wanted to continue FPJ’s legacy (whatever that legacy is apart from Panday and other action-packed films.. Mabuhay ang Panday!).

Digong, as you very well know,  has always been the reluctant presidential candidate until he was given the go signal by the Comelec and was cleared of all technical obstacles filed against him. He has always said losing the presidency is never his concern and that he will not die losing this bid. I seriously believe that with so much accolades up Digong’s sleeves, he honestly doesn’t need it. We cannot judge categorically the primary motives of each candidate, whether it’s a genuine care to help the Filipino people or to advance their self-interests and of their cronies. Oftentimes, I can’t help but wonder why the presidency is highly coveted, that many resort to mudslinging, corruption and other dirty schemes just to win the country’s highest political post. But that is another story altogether.

Give Duterte a chance

Ninoy Aquino is often tagged “the best president we never had”. Naga City’s pride Jesse Robredo was very much celebrated only after his very unfortunate death. And we were left with ‘could have beens’ and ‘what ifs’.. Like Ninoy would have brought the country to greater heights had he served as the president and Jesse would have been a great senator had the unfortunate incident not happened.  Of course, this is a pretty strange reasoning, but I hope you get what I mean. So where am I getting at? Let’s give it to Duterte while he still can. Let’s allow this country to be governed by someone highly capable and someone who fully understands the problem especially of that of Mindanao.

Digong is already 70. He could have served another term in his home town where he is very much familiar of the people, the environment and everything in between. But due to persistent public demand (which is very much documented in all of his past interviews with the broadcast giants), he finally heeded the Filipino’s call for him to run and serve this country, despite all the risks that this decision entails, with the sole intention of serving the greater Filipino people outside of his turf, Davao City. What I am trying to say here is that, Philippines, we are now given the chance of putting someone highly capable of leading this country to move forward. Let’s not waste this chance.

Give Philippines a chance

Philippines, I am no political expert nor am I a decorated economist or a seasoned journalist, I am an ordinary professional accountant working in the audit industry, a twenty-something millenial, single since birth (yes, kelangan maisingit *winks*) but I appeal to all of you: Give Duterte a chance. Look beyond his macho Vin Diesel or Van Damme personality and his cussing, look at his credentials, his concrete platform no other candidate can match (well, except of course for Miriam haha) It is not everyday you get the chance to vote for someone who can sincerely work for and lead the country and its people.

He may not have the legal brilliance of Miriam Santiago, the eloquence and serenity of Grace Poe which makes her very promising, the political machinery of Binay and Roxas to back his campaign, but Digong has the experience, leadership and political will. But should you prefer, get smitten and therefore admire the flowery words of traditional politicians, then it’s your call. But I hope that we all realize that the success of the president does not rely on eloquence, serenity, political machinery etc. We need a president who is not necessarily a good debater but one that acts and has strong political will to gets things done.

I’m ending this post by writing what I said in my Facebook post: Philippines, make Digong our country’s next leader. Itinataya ko po ang maliit kong pangalan.. He will not disappoint. 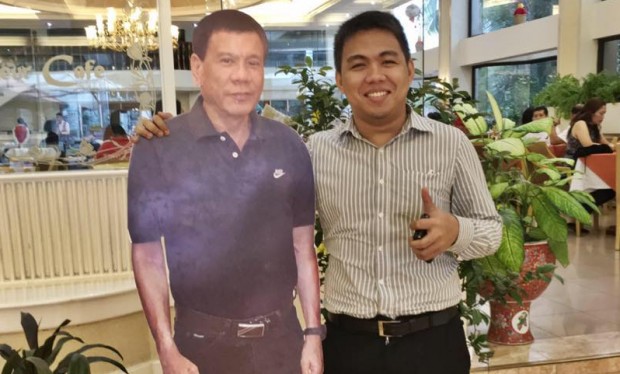