*Patrik’s note: WordPress is kinda tricky these days. To my readers, please ignore the ugly paragraph structure as I’m currently working on it. Please bear with me as I overhaul this blog in the coming days. Thanks!*

I don’t intend to make this a long article, so allow me to emphasize my point right away:

STOP THE HATE ON GAY PEOPLE. IT’S NOT TOO LATE TO GROW UP.

I checked my Twitter last Thursday and noticed that #RespectFifth is a Trending Topic worldwide. For the uninitiated, Fifth Pagotan is a 22-year-old housemate of the hit ABS-CBN reality show Pinoy Big Brother. Apparently, Fifth admitted to Big Brother that he is a ‘bisexual’. It came as no surprise to me as I already noticed it the moment he entered the house at the start of the season. But given his ‘boy-next-door’ looks, his ‘coming out’ was something I never saw coming.. on national television at that!

Check out the video of his confession to ‘kuya’ below.

Out of curiosity, I checked what other people were saying about Fifth’s confession. There were the occasional “I’m so proud of you Fifth” and “I support you Fifth” from fellows and his fans. But to my surprise, I also noted some harsh comments from the all-encompassing, always-right-they-never-go-wrong, theyre-so-clean-like-they-drink-eight-glasses-of-casino-alcohol-everyday religious people. Some said:

2. Fifth needs to go back to the right path or he will be denied by God

3. What a shame, a good-looking guy turns out to be gay

My blood pressure level went up upon reading the remarks of some people.

While it is true that we are entitled to our own opinion, I believe it’s an entirely different scenario when one’s remarks lambast or mock other people.

‘TREAT’ AND ‘WORK’ ON FIFTH

This is pretty alarming. People who said this pretty much suggest, that to this date, they believe gayness is a disease, something which can be treated or healed. OH PLEASE. The last time I checked, we’re on the 21st century already and it’s year 2014. I don’t understand why some people, at this point, still have the guts to mock gay people.

It’s not like taking one paracetamol or even mefenamic acid capsules four times a day and then I can happily say: “Yayy mom. I’m no longer gay. I’m already straight.. as straight as a ruler!” NO BITCHES. JUST NO. Gays are humans, we are not machines.. you can’t just “fix” us!!

Of course, I’m not gonna argue with them religious  people using deep Bible verses as, honestly, I haven’t read the Bible for ages. But I’ll be using plain and simple argument:

Nobody wanted to be gay in the first place. I did not decide to be gay. While my dad and my mom were still doing their “thing”, it was neither upon them nor mine to decide what sexual orientation I will be embracing once I come out of that fuckin’ little place I hate.

Trust me.. IT’S NEVER OUR DECISION. The only decision I made was to finally RECOGNIZE  IT, WHO I AM, WHAT I AM AND ACCEPT THE TRUTH.

Take it from someone who has tried all his might to be ‘straight’– yes.. ME, back in highschool. Yes, it had been a long and tiring battle to deny my sexuality and probably, outsmart my gay cells. NEVER WORKED. But my personal struggle in the gay scene isn’t the main point of this article. But suffice it to say, as what other people would always say, and I believe them so: “once a gay guy, always a gay guy.” 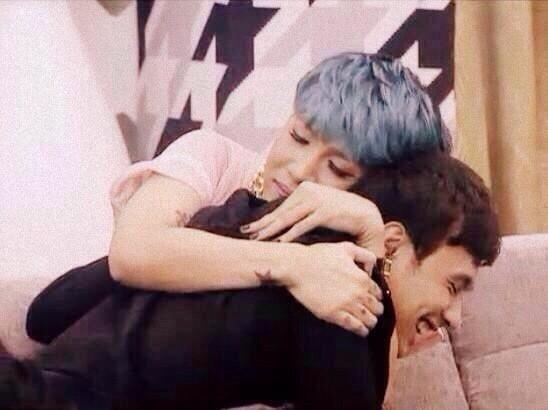 Vice shows his support to Fifth as he enters the PBB house. Image credit: Poging_Pasaway on Twitter.

MESSAGE TO OTHER CLOSETED GAY PEOPLE OUT THERE

Take it from Sebastian Castro, the celebrated gay icon in the Philippines. Since you are already out, there are no more reasons for you to be afraid what other people might say against you and your sexuality. And its true, their insults die with your shame.

It takes a lot of courage to be out and proud. Take your time. Don’t be in a hurry. You’re not obliged to tell everyone you’re this or that. You don’t need to explain yourself to people just to be accepted. As long as you recognize it, you accept, you don’t hurt anyone.. IT’S PERFECTLY OKAY.

YOU ARE GAY. WE ARE GAY.

Accept it. Embrace it. Trust me, it’s a happier world when you come to accept it. 🙂 And our Lady of Gaga, saint of gaylandia, will be very very happy. Kidding!

Just to echo Bianca Gonzalez, I hope time will come gay people wouldn’t have to explain to anyone why they’re gay, in the same way that straight people do not explain why they’re straight.