One friend of mine who is now studying in University of the Philippines – Diliman shared that her classmates often ask her: “If there’s war in Cotabato City, aren’t Davao City people evacuating?”

Now this is just stupid. Obviously, these people do not know how big Mindanao is. When asked by my friend why they think that way, their common answer was: “Coz we always see it on TV. Duh. Lagi kaya kayong headline: GULO SA MINDANAO.” 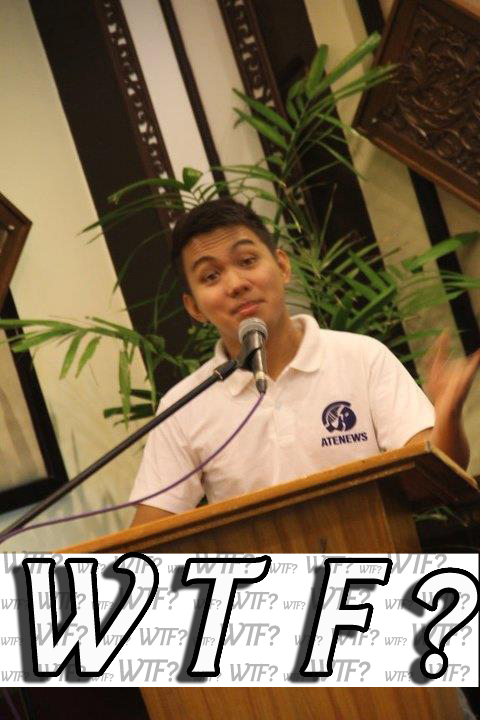 Thanks to Vim Malicay for editing the photo.

I have always believed in the integrity, objectivity, and truthfulness of the ABS-CBN News and Current Affairs, I have always admired the dauntless and steadfast GMA News Department and even TV5 has proven itself quite well on its ability to acquire state-of-the-art technology that helps bolster its news arm.

But these three well-respected networks have something in common: they all failed to deliver as per the so-called Mindanao war account.

I stumbled upon one online forum the other night. One thread caught my attention. Bakit ang gulo ng Mindanao?

It is very depressing to know that there are people from Manila and some other parts of Luzon who mock Davao City and other neighboring areas, and even belittling us who reside from the southern region.

I couldn’t help but applaud Davao City councilor Mabel Sunga-Acosta when she published a status message on her Facebook account:

AN APPEAL TO MEDIA: Please stop saying “krisis sa Mindanao” o “kaguluhan sa Mindanao”. Mindanao is a very big island. While a tragedy indeed happened in Basilan, it is only a part of a big land area. It is a disservice to all who live in Mindanao in peace. People who are not from Mindanao tend to think that there is chaos all over here when there is none. If a bombing incident happens in Makati, or Manila, for instance, you would not call it a “Luzon crisis or problem”, would you? You have to be more sensitive and professional because media has the ability to affect the consciousness of the viewers. You can help the country achieve what it desires. Choosing your words well in your news report matters a whole lot.

I know that my experience in campus journalism is not, in any way, at par with the experience of those who are currently working in the mainstream media outfits in the Philippines. I have already served as a news writer and researcher of Atenews, the official student publication of the Ateneo de Davao University. And being the current Senior News Editor of this publication, I understand that sensationalizing news is a common occurrence among tv networks.

Last October 25, thousands of demonstrators in Marawi City burned tarpaulins that had the photos of TV Patrol’s news anchors Korina Sanchez, former vice president Noli de Castro and Ted Failon. This happened following the text poll aired on the program asking the audience regarding the proposed all-out war in Mindanao. According to the demonstrators, the program is just flaming the fire even further.

Let’s do the math (if you guys fuckin’ know it)

Mindanao is the second largest island in the Philippines at 94,630 square kilometers (Wikipedia) and is home to 27 cities and 26 provinces. Zamboanga Sibugay, to make myself politically correct, is part of Zamboanga Peninsula. The entire peninsula is just a part and parcel of the entire Mindanao region.

Without batting an eyelash, I can say that whoever coined this phrase is a stupid, imprudent and hasty journalist. Without a doubt, this is a pure product of hasty generalization based on insufficient evidence at the expense of those living in war-free cities and provinces in the Mindanao region.

Gulo sa Mindanao is plain bullshit. It’s an overkill. Yes, there’s war in Zamboanga Sibugay. But it’s 100+ kilometers from the Davao region. It’s not that I’m disowning Zamboanga and other war-inflicted zones in Mindanao. Yes, the title itself makes a great news headline. You will definitely win the attention of the viewers. And let me say kudos to the person who wrote the script and to the reporter who just read it using the idiot board. But, so what?

Yes, it’s your job to spread the news, to convey what must be conveyed. But it never occurred to me that sensationalizing news is part of your job description too.

Sensationalized news and its effect

Tony Burman, the former editor-in-chief of CBC News, said this:

Every news organization has only its credibility and reputation to rely on.

Yes, you attract more viewers because of your catchy headline “GULO SA MINDANAO” which in turn leads to more advertising load on your news programs. The effect however, is quite misleading. It is an entirely different matter when your stories go further than what is necessary to achieve the goals of your news reports. Indeed, it takes a great deal of professionalism for one to deliver well.

According to Section 9 (SENSATIONALISM) of Article I of the 2007 Broadcast Code of the Philippines by the Kapisanan ng mga Brodkaster ng Pilipinas (KBP), “The presentation of news and commentaries must always be in good taste (9.a),Morbid, violent, sensational or alarming details not essential to a factual report are prohibited (9.b), The presentation of news and commentaries must not be done in a way that would create unnecessary panic or alarm (9.c).

A call for responsible journalism

Media is seen as the most powerful tool to influence the people. People instantly believe something when they see it on the television. You have to understand that the average people have the normal tendency to fall into wrong conclusions just because the majority thinks that way. This clearly falls under the ideological fallacy of argumentum ad populum, an argument that most likely than not, would lead people to believe something as true just because most people  believe it. See the effect?

I would just like to reiterate what Davao City councilor Mabel Sunga-Acosta said:

If a bombing incident happens in Makati, or Manila, for instance, you would not call it a “Luzon crisis or problem”, would you?

With everything that I have said, this suggestion: